I know that we have written about this subject so may times, but for customers safety we believe that you can never give this subject enough attention.

We recently wrote an article, excerpts of which were featured in The Guild's Newsletter

Read the full article below:

Counterfeit Pigments, how to spot them, and why you should avoid them

As a generalisation, those who purchase counterfeit items see it as a victimless crime; they get a product at a much lower price and in the worst case scenario it is not manufactured to the same high standard as an original, or may not last as long but in justification, it also didn’t cost as much as an original. In any case very little regard is given to the brand manufacturers or Intellectual Property owners.

While this sense of getting something cheaper, or even ’beating the system’ may be ‘acceptable’ for a handbag or purse, what about for Semi Permanent Makeup pigments, this isn’t something that may fall apart after a while it is a product that will be placed under the skin, usually on the face, and could have disastrous results for the person on the receiving end. 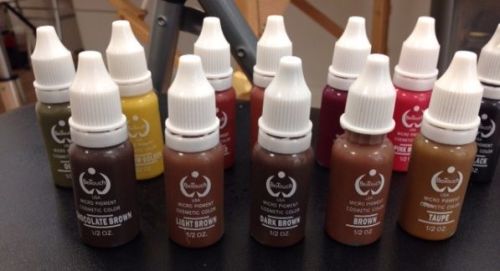 Often the counterfeit pigments will look just like the genuine article, to the untrained eye at least. The ‘good’ counterfeits have all the same information on the bottle. In the case of Biotouch Pigments they have the logo and the colour on the front, and the ingredients on the back, however just because it has a series of ingredients listed can you really trust that it is accurate; counterfeiters after all are also looking to generate a profit from their crime and coupled with the fact that they cannot sell the counterfeit pigments for the same price as an original they need to make cost savings somewhere, and this is usually in the quality of the materials that are used.

Those knowingly sell the pigments share the same disregard as the people who make them for the health and well-being of the people who have the procedures done.

Of those who responded to our survey, 93% said that they would be worried about safety concerns if they were to use a counterfeit product during a procedure while less than half that amount were concerned with the moral or ethical issue of purchasing counterfeits.

Other than the obvious effects of having an unknown substance tattooed onto your face the effects of the counterfeit pigments are far reaching and ultimately damaging to the brand itself. In the last 4 years alone there have been 4 reports for ‘Biotouch’ products on the European Commission Rapid Alert System, Rapex that lists dangerous products that have been intercepted travelling between countries. The problem is that the pigments that have been reported are not Biotouch products but rather inferior counterfeit products, but anyone reading the reports and the list of risks identified won’t necessarily know that and in turn it has a damaging effect on the Biotouch Brand.

Of the horrors that are identified in the reports some that stand out can be seen in the table below, along with the recommended maximums (according to the EU resolution RESP (2008))

Nickel has a very high allergenic potential and can cause skin irritation and doesn’t really have much place in pigments, but more worryingly is the presence of Aniline in a counterfeit batch of Biotouch Sunset Orange seized in Sweden; Aniline is a toxic compound, yeas you read that correctly, toxic, and has been classified by the US Environmental Protection Agency as a Group B2, probable human carcinogen which is especially scary when you realise that the groups for classification run from A to E, and yet the people who manufactured this product had nothing passing through their mind other than profit.

After reading these reports, we decided that we would purchase some counterfeit products and have them tested by a laboratory. We purchased the pigments from a well-known Chinese wholesale site and paid $40 US Dollars for 8 bottles of one colour; it is understandable that people may feel that the counterfeit will ‘do the job’ as it does represent a huge saving over buying the original products but at what cost?

When the pigments arrived in the post the bottles looked cheap and the printing on the bottles was not of the best quality. The colour of the Olive we had purchased was more of a dark green colour and the lot number was a random string of numbers instead of the date format that always appears on the sides of genuine Biotouch pigments. 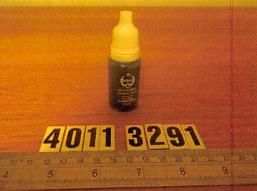 We sent samples off to the lab, and to make the tests fair and to be able to make a comparison we also sent a genuine product to be tested side by side.

This would allow us to make a fair assessment of quite how bad the counterfeits really were, although we had an idea based on a simple visual assessment.

We had the pigments tested for the presence of Mould, Yeast and Bacteria as well as a full De-formulation in which the lab broke the pigments down to their individual components and identifies what percentage they were present in.

For those who are unfamiliar with Biotouch pigments, they come in a few ranges and are made up of a glycerine base with a colour pigment, the amount of glycerine and colour varies between ranges.

On receiving the results they were not nearly as bad as the pigments that had been reported on the Rapex system, but they were not anywhere close to the original pigments in terms of percentage of ingredients.

The counterfeit also contained Silicon Dioxide, which is generally used as an anti-caking agent and is the same substance that comes in the little bags to absorb moisture. While it does not have any associated health risks it is also means that the pigment doesn’t have the correct colour that it should. The counterfeit also contained Sodium Chloride which is not harmful but again has no colouring properties and is not found in the genuine article.

More worryingly in our test results was 5% of a dye that was not able to be identified with the labs standard testing; while we have no current proof that it is something nasty, it does make you wonder given what has been found in other counterfeit pigments.

As the Trademark owners of the Biotouch brand here in the UK, we do everything possible to ensure that pigments being sold are genuine; we work with most online market places to ensure that counterfeits are not being sold but it is important when making a purchase that you buy the ‘real deal’

Counterfeit pigments have a series of giveaways but the first thing that always stands out first to us from pictures posted online is the bold font that is often used on the front of the bottles. Original pigments do not have this. If you are unsure when purchasing then do not be afraid to email the seller and ask them for the lot number of the pigment. Biotouch always have a lot number in an American date format, either MM/DD/YY on the older pigments or MM/YY on the newer bottles; if the seller is genuine then they will have no issues in giving you the lot number. If when you receive your pigments they mention China or P.R.C. anywhere on the bottle then send them straight back and ask for a refund as Biotouch pigments are manufactured in the USA. More recently Biotouch has started to standardise their bottles and use a generic bottle with the colour printed on a white panel on the side.

The most important thing as a technician who buys pigments for use on clients is that you are diligent; if companies are selling genuine products then they will have no problem providing evidence.

"Biotouch", The Biotouch Brand and the Biotouch Logo are registered Trademarks of Eternal Beauty (UK) Ltd